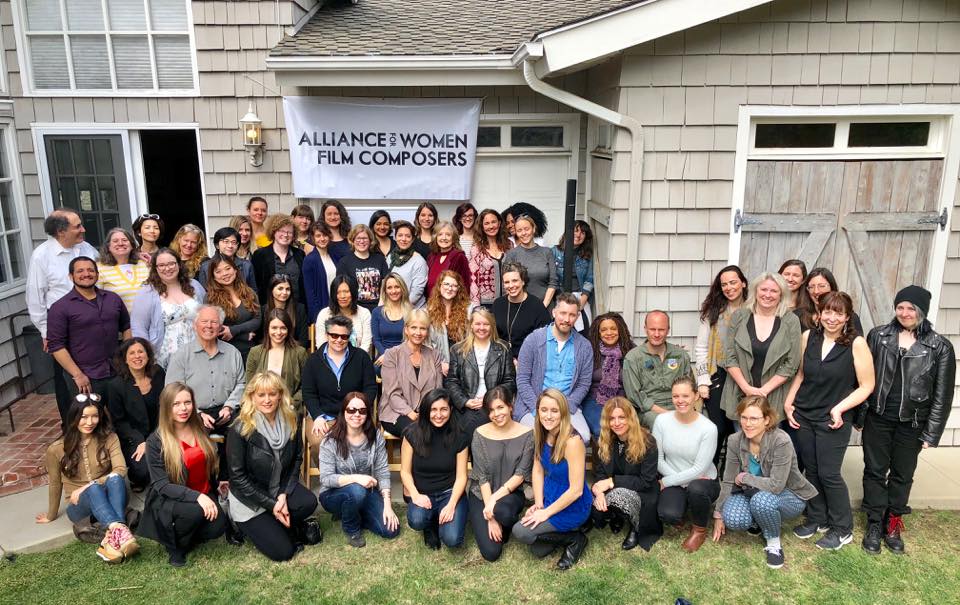 What a year it’s been! The AWFC has taken a leading role in the much publicized diversity conversation occurring in Hollywood and beyond. Our efforts to increase the visibility of women composers within the industry have included the addition of women to discussion panels and presentations during major festivals and conferences.

Here is a list of the AWFC events for the last year:

12/2017
Professional Development Series:
“The Artist/Composer” with Starr Parodi and Jeff Fair
In addition, Starr will discuss scoring award winning trailers, live performance projects, as well as collaborating with her husband Jeff Fair who will join us for a portion of the workshop

For RELEASE October 13, 2017
AUTHORED BY THE ALLIANCE FOR WOMEN FILM COMPOSERS

We, the community of composers, songwriters, orchestrators, arrangers, music supervisors, music editors, agents and executives, align with a commitment to stand up against sexual harassment and gender discrimination. It is our responsibility to unify on this front. From within our organizations and beyond, we pledge to work together to identify safe avenues for reporting harassment and discrimination and build a network of responsibility and action that can effectively address these issues within our own community.

What a year it’s been! The AWFC has taken a leading role in the much publicized diversity conversation occurring in Hollywood and beyond. Our efforts to increase the visibility of women composers within the industry have included the addition of women to discussion panels and presentations during major festivals and conferences at:

The visibility from these events has generated growing coverage of women composers with articles featured in Emmy Magazine, The Hollywood Reporter, Variety and Alliance for Women Film Journalists.

Our culminating effort in this year took shape with The Women Who Score: Soundtracks Live, an orchestral concert through Grand Performances. With the partnership of The Film Music Society and White Bear PR, and the support of numerous sponsors, including support from major studios like Warner Bros, Walt Disney Pictures, 20th Century Fox, and Sony Pictures.  The resulting project highlights the work of 20 of the industry’s leading women composers. Read Billboard Magazine for more of the story.

And finally, to punctuate the importance and success of our first year, a wonderful honor has been bestowed upon the AWFC President, Laura Karpman. In July, Laura was elected to the music branch of the Board of Governors for the Academy for Motions Picture Arts and Sciences. As a founding member of the AWFC, it is clear that Laura’s visionary passion for diversity will be a valuable addition to this institution.

We’re off to a great start and there are no plans to slow down. As we look ahead to the next year, our primary goal is to continue our influence, driving the industry conversations on diversity and championing the inclusion of creative women in media. Among the ideas we’re considering for development over the next year include establishing an annual membership meeting & networking events in Los Angeles, a salon-style discussion series and possibly a mentorship program, plus our ongoing annual brunch during the Sundance Film Festival. Honoring the achievements of women composers featured at Sundance. With over 110 women composers joining the AWFC over the past year, we have a wealth of talented and passionate members who wish to be engaged in more inclusive conversations and activities.

The acknowledgement and support for AWFC’s mission has been amazing. Our mission has been confirmed with a swell in global membership that exceeds 110 female composers with credits spanning multiple media disciplines. The women composers, supporting members and donors who have joined with AWFC prove that there is a true need for advocacy, education and an on-going dialog regarding the inclusion of women in all media outlets. To these ends, we sincerely thank you for your continued encouragement and support. Together, we are powering positive changes.

This week's get together will be hosted by composer and AWFC Board Member Nami Melumad. Join us for an open discussion on Getting Work and Making It Work. What is it like finding work before, during, and after COVID-times? Once you find work, what makes a successful composer-director collaboration?
WEDNESDAY, OCTOBER 28

Hannah Abrahim is a 19-year-old singer songwriter based in Los Angeles, & is currently attending the University of Southern California, majoring in Performance with a Music Industry minor.

Hannah strives to use her career as a platform to empower minorities, present a perspective that is able to inspire all, as well as facilitate love and empathy within her audience. Her debut single “Afterparty,” is a dance pop collaboration with DJ Alkii. Hannah’s music can be found on all streaming platforms & she is currently in the process of recording a series of singles set to release in late 2020.

Grace Corsi is a composer & climate activist. She moved to Los Angeles to pursue a dual degree in Jazz Voice & GeoDesign at the University of Southern California. She developed a compositional style that stretches across genres, fusing jazz harmony, folk melodies, nature imagery, & unapologetically honest lyrics.

Grace has performed at venues like the blue whale, Catalina’s, & Carnegie Hall. She has studied under LA-based musicians Kathleen Grace, Sara Gazarek, Patrice Rushen, & Vince Mendoza among others. She is currently recording more original music, which will be released sometime this year.

Kat Vokes is a Brooklyn-based composer, vocalist, & pianist, specializing in writing for film, television, & other media. She trained as an opera singer at the prestigious Oberlin Conservatory of Music, & has worked closely with the New York-based chamber ensemble Desdemona; having written numerous scores that span nearly every genre.

She has sung in festivals across the U.S. & Europe & performs regularly with her jazz band throughout NYC & abroad. Vokes is signed to Ropeadope Records, with whom she released her debut album, Clockwork, in May 2019. She is currently pursuing a master’s degree in Music Theory and Composition with a concentration in Screen Scoring at New York University.

Please consider a donation, which can be made separately, or in addition to your membership.