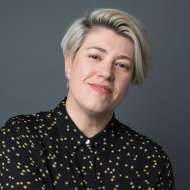 Allyson Newman gained her Masters degree in composition from the Sydney Conservartorium of Music. Her first feature film Watermark screened at the Cannes Film Festival in 2003 after which she then moved to LA to study film scoring at USC. Allyson has been awarded both an Australia Council for the Arts Grant and an Australian Guild of Screen Composers Award for her work in film music. Allyson scored the multi award winning documentary feature Limited Partnership that premiered on PBS Independent Lens in 2015. Allyson wrote music for the comedy series Filthy Preppy Teens (2016), as well as the three-time Emmy Winning TV series Childrens Hospital.  Allyson also scored the Emmy nominated (2016) media series Her Story,  In July 2017 Allyson participated in the BMI Conducting Workshop and then went on to score  Kusama-Infinity  which premiered at Sundance 2018 and was released theatrically around the world in Sep 2018.  Allyson collaborated with Oscar Winning directors Jeffrey Friedman and Rob Epstein to score State of Pride which opened the SXSW Film Festival 2019. Allyson also scored Making Waves: The Art of Cinematic Sound which had its premiere at Cannes 2019. Currently you can hear Allyson’s work on The L Word Generation Q which plays on Showtime. Allyson is also a proud board member of the Alliance of Woman Film Composers!