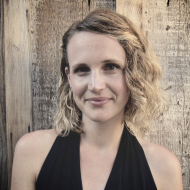 An award-winning composer and multi-instrumentalist, Ariel Marx draws from many different genres and often combines orchestral and rare instruments with electronics to create unique worlds of sound. Her scores have premiered alongside films at national and international film festivals, such as Sundance, Tribeca, and SXSW—winning awards at several for her musical contributions.

She has also scored dramas WEST OF HER by Ethan Warren and Ryan Caraway's BY JINGO, and Armen Perian's interactive augmented reality film about a family of human traffickers, THE ANGRY RIVER. Additionally, she has scored numerous award-winning short films that have played at the world's premiere festivals including — most recently — Mariama Diallo's HAIR WOLF (Sundance, SXSW), Laura Moss's FRY DAY (SXSW, Tribeca).

Outside of film, she has scored television series including comedy series UnChartered and The Pioneers. Ariel has additionally contributed to BLIND tarring Demi Moore and Alec Baldwin, and assisted composer Marcelo Zarvos on Showtime’s THE AFFAIR starring Dominic West and Ruth Wilson, as well as, Amazon’s Z: THE BEGINNING OF EVERYTHING (starring Christina Ricci and David Strathairn and WONDER (starring Julia Roberts and Owen Wilson).

The Tale, To Dust, 10 Things We Should Do Before We Break Up