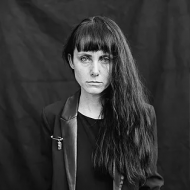 Carole Sabouraud is a composer and music producer. Born in France, she moved to Spain at an early age and started playing in bands while studying sound engineering, guitar, and vocals. In 2009 she began scoring short films and documentaries, one such was Real Life Test, a queer series that earned recognition from festivals and educators worldwide. In 2013, she moved to Los Angeles, where she continues to score films and other media while performing and recording under the moniker Edith Crash. Edith Crash was included in the 2016 NPR’s list of favorite SXSW discoveries. Her song “Casser” appeared in the film Knock Knock directed by Eli Roth and starring Keanu Reeves. In 2020 she earned a graduate certificate in film scoring from UCLA; she also composed and produced “Suture” an epic trailer album released on Position Music.