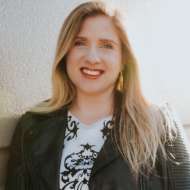 Christy Carew
Los Angeles•christy_carew@yahoo.com•http://www.christycarew.com•IMDb
Canadian-American composer of music for film, TV, advertising, multimedia and the concert world. First and foremost a storyteller; curious about everything. Active in the film music community since 2006, Christy is an alumna of the prestigious Sundance Institute Film Music Lab at Skywalker Sound (2018) and the renowned ASCAP Film Scoring Workshop (2019)
This user account status is Approved

Christy Carew is a Canadian-American composer of music for film, TV, advertising, multimedia and the concert world. She knew she wanted to be a film music composer at the age of 6 after seeing "Star Wars" for the first time, telling her parents, "I want to make music like that!" while racing around the house conducting and singing.

Ms. Carew has thoroughly been enjoying living a life full of music ever since. She loves to score all genres of film and has worked in drama, comedy, action and horror, as well as short form and feature documentaries. Christy considers herself first and foremost a storyteller, and feels honored to collaborate with directors on pieces of art that impact, uplift, transport & comfort those who experience them. Her score for the romantic sci-fi short "Virtually" was nominated by the Tenerife International Film Music Festival (FIMUCITÉ) for the 2019 Fimucinema Award for Best Original Score (Short Film). Christy’s work on “Virtually” also was honored with the award for Best Score - Short Film at Filmquest, and received the 2019 Certificate of Achievement: Honorable Mention for Best Original Score at the Independent Shorts Awards.

Christy was selected as one of just 8 composer fellows in 2018 to participate in the prestigious Sundance Institute Film Music and Sound Design Lab, which took place at the legendary Skywalker Sound facilities. Mentors at the Lab included Thomas Newman, Harry Gregson-Williams, Tyler Bates and Heather McIntosh. More recently, she was also selected to be one of 12 international participants in the renowned 2019 ASCAP Film Scoring Workshop, which culminated in a 65-piece orchestral recording session at Fox. Mentors included John Debney and Bruce Broughton. Christy is incredibly grateful to BMI and ASCAP for these life-changing opportunities!

In 2012, Christy was chosen from hundreds of applicants and hired to be Music Director and In-House Composer at one of the largest production music libraries in the world. Through her work at 5 Alarm Music, she has had placements of custom original music and arrangements in major studio features, network television shows and national advertising campaigns. (Ask her sometime about being on set of the hit CBS show "Scorpion" performing her Bach arrangement with a six-figure robotic arm taped to her forearm.) Ms. Carew has a true passion for collaboration and serving the project, in whatever medium she's working in.

She is active in the media composing community as a member of the TV Academy Music Branch and Membership Coordinator for the Alliance for Women Film Composers. As a concert composer, Christy was a semi-finalist in 2013 for the Sorel Medallion Choral Composition Contest, and has had her work premiered by the Reno Pops Orchestra.

When she's not making music, Christy is spending time with her amazing family, reading sci-fi & fantasy novels voraciously, dreaming of New Orleans, and thinking way too much about the Fermi Paradox.