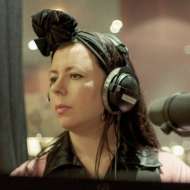 Daisy Coole is a composer and saxophonist who has toured Europe as a jazz and session musician, appearing on international radio and television alongside artists such as Ebony Bones. In 2014, with guitarist and composer Tom Nettleship, she co-founded music and post-production sound company Two Twenty Two, creating music for film and media.

Their music has been featured in the New York Times and the United Nations General Assembly, performed live at the Royal Albert Hall, and has won a Royal Television Society East award for short documentary ‘Nial Adams’.

Feature film scores in recent years include award-winning US drama ‘Ask For Jane’ starring Sarah Steele (The Good Wife) and Alison Wright (The Americans), Rohingya documentary ‘Shanti Khana’, which was narrated by Ashley Judd, and ‘Clay’s Redemption’, the score for which was described as “an absolute formula for success” by top UK film critic, Mark Kermode.

In 2019 they branched out into composing for dance with two projects: ‘Botis Seva: Air’, a documentary/dance film starring Olivier Award-winning choreographer in a rare solo outing, and ‘Swing, Sister, Swing’, a narrative swing dance show with a live recorded score featuring a 16-piece all-women big band.

Daisy is a proud Board member of the Alliance for Women Film Composers. She is an advocate for making the world of film composing open and accessible because she wants all young women to know this career is possible.