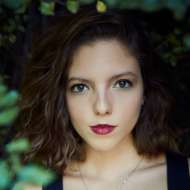 Esin Aydingoz is an LA-based composer, originally from Istanbul, Turkey. She has written music for a wide spectrum of projects including films, TV series, video games and musicals, most of which have screened at festivals and streaming platforms around the world. She co-founded AudioBrew and worked as their lead composer for three years. She wrote for MPATH's Phenomenal Women albums, worked with many award winning composers such as Jacob Shea, Lili Haydn, and Adam Peters & toured with the BSFO, where she conducted her music live to picture in various cities in North America including Boston, NYC, and San Francisco.

Besides her scoring career, Esin is a classically trained pianist, who has recorded for SONY, Hallmark, Disney+, and Netflix. She works with Disney Music Group as the Assistant Music Director for their a cappella group, DCappella, and has also music directed for musicals and festivals in LA, including a performance at the Academy of Motion Picture Arts and Sciences. She arranged for Grammy-Award winning artists such as Lalo Schifrin and Booker T. Jones as well as America's Got Talent star Brian Justin Crum and Disney.

Esin holds a degree from the prestigious Berklee College of Music, where she earned a dual B.M. degree in Film Scoring and Contemporary Writing & Production, and a minor in Musical Theatre Writing. In 2019, she had the honor of joining The Alliance for Women Film Composers as a board member, for which she is now serving in the leadership team as the Secretary.