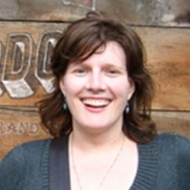 Heather McIntosh started her musical career playing with the bands of The Elephant 6 Collective, Gnarls Barkley, and Lil Wayne. Following her touring days, she has been regularly composing music for film and television since 2011.

She is an alumna of The Sundance Institute Music & Sound Design Labs at Skywalker Sound, a 2014 Sundance Institute Time Warner Foundation Fellow, and a member of the Academy of Motion Picture Arts and Sciences and the Television Academy and her credits include Compliance and Z for Zachariah directed by Craig Zobel, Faults and The Art of Self-Defense directed by Riley Stearns, the series One Dollar for CBS All Access, Astra Taylor’s feature documentary What is Democracy?, The Quarry directed by Scott Teems and is currently co-composing the score to The L Word: Generation Q with Allyson Newman.

Compliance, Z for Zachariah, The Art of Self-Defense, The L Word: Generation Q