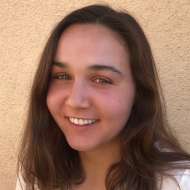 Kate Diaz is an LA-based composer-songwriter-producer.

She is the composer/co-lyricist of a new musical in development at La Jolla Playhouse.  Kate's recent projects include scoring The Last House Standing (feature documentary) and co-scoring The Beachbuds (Disney+ animated series) and two docu-series. Her pop/rock songs have been placed on multiple tv shows (Love Island, Catfish, Home and Away), and she has written theme songs for podcasts (ESPN).  Kate also composes scores for trailers and commercials (Disney+, Hulu, AppleTV+, Fox, Ford, Subaru, NASCAR, Pür Water Filters).  Additionally, she has been arranging and music editing for two animated tv series (Disney+, Hulu).

A multi-instrumentalist, Kate self-produces her scores and songs.  She is endorsed by Godin Guitars and has released five albums of original songs.  A performing songwriter from a young age, Kate has played over 300 shows, including at national festivals and as a guest performer of national headliners.  Reviewers describe her as an "accomplished guitar player" with "an astonishing voice" whose songs have "clever lyrical content" and "natural rhythmic flow."