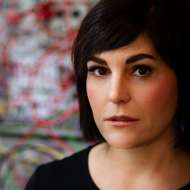 •lprimiani@gmail.com•http://www.leannaprimianifilm.com•IMDb
Composer Leanna Primiani explores the limits of musical form, sound, and time by blurring the landscape between the acoustic and electronic worlds. She writes music for the concert stage, film, and as an electronic ambient artist. Leanna’s music has been described as “hauntingly evocative,” while Variety’s Jon Burlingame calls the music “...remarkable”.
This user account status is Approved

Leanna Primiani is a musical storyteller. Transforming traditional narratives, she writes music that changes how listeners see themselves and the world around them. Using electronics as well as orchestral instrumentation, she explores the limits of musical form, sound, and time.

Starting out as a conductor, with credits including the National Symphony and LA Opera, she never imagined that composition would take over her life. Leanna channeled her kinesthetic experience of music-making as a conductor into her writing, with her music being championed by the Nashville Symphony, the Cabrillo Music Festival, and the Centre de Création Musicale Iannis Xenakis (Paris).

Taking her story-telling further, she composes for film and television. Credits include the WIF/Fox Searchlight production of Signal, as well as the remake of the cult classic The Bad Seed, directed by and starring Rob Lowe. Variety’s Jon Burlingame calls the music “one of the most remarkable… scores of the past season.”

Experimenting with electronics led Leanna to expand her sound palette as a solo ambient artist performing under the moniker, ANASIA. Described as “hauntingly evocative,” her latest album, Blurred, explores the landscape between the acoustic and electronic worlds. This offers listeners space to experience sound without boundaries.

A native Californian, Leanna currently splits her time between New York and Los Angeles with her husband and daughter. She earned a doctorate in composition from USC and has studied with Leonard Slatkin, Peter Eötvös, Steven Stucky, and Morten Lauridsen. She is published by Subito Music and is a member of BMI, the Recording and Television Academies, Women In Film, Women In Media, The Alliance of Women Film Composers, New York Women Composers, and The Society of Composers and Lyricists.