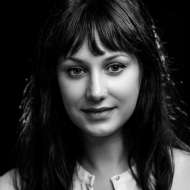 Mandy Hoffman
Los Angeles, New York•http://mandyhoffman.com•IMDb
Guided by her passion of storytelling and visual art, Mandy Hoffman found her musical niche in composing to picture. With a versatile and unique style, she has been scoring films, TV shows, commercials and art installations for over a decade.
This user account status is Approved

Mandy Hoffman is a visionary composer who has been writing for various mediums for over a decade, and is a member of The Academy.  She has scored numerous films, series, advertisements, and art installations that have appeared in theaters, top film festivals, television networks and galleries all over the world.  Recently her music has moved to the concert stage, with works premiered by The Orchestra Moderne at Lincoln Center (2019) and The Hollywood Chamber Orchestra at The Wiltern in Los Angeles (2018).

Her collaborations with director Azazel Jacobs have garnered critical acclaim, and her orchestral score to A24's The Lovers (2017) not only received abundant praise from the press, but it ended up on Film Music Magazine's Top Ten Best Scores of 2017.  It was also called "..a stealth contender for one of the finest film music of the century so far" by The Moveable Fest. She worked with director Minhal Baig and executive producer Jada Pinkett Smith on the poetic feature Hala (Overbrook Entertainment), which premiered at Sundance 2019 and then on Apple TV+.

Hoffman teamed up with Joey Soloway on the lauded Amazon Studios series titled I Love Dick (2017), and her music can be found on a myriad of television shows.  Most recently she scored the Anna Kendrick led comedy, Dummy on Quibi (2020).

She is a multi-instrumentalist with a keen understanding for dramatic nuance, and can write honestly in many musical styles and genres.  She is both versatile and unique.  After being told countless times that her music sounded “cinematic”, she pursued serious musical training, first as an multi-award winning student at Pasadena City College’s prestigious music program and then was certified at UCLA Extension’s celebrated Film Scoring Program.

She is active in the composer and film communities, and often appears on panels discussing her craft.  She is a repeat guest lecturer at Steinhardt's Screen Scoring Graduate Program (NYU), at Feirstein Graduate School of Cinema/Media Scoring (CUNY), and at Sound Thinking (CAT).