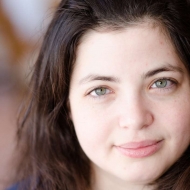 •nami@namicomposer.com•http://namicomposer.com•IMDb
Nami Melumad is a Los Angeles based film & tv composer, originally from Tel Aviv, Israel. She has written music for over 140 projects including Thor: Love and Thunder (Marvel), Star Trek: Strange New Worlds and Prodigy (Paramount+), The Woman in the House Actross the Street from the Girl in the Window (Netflix), An American Pickle (HBO Max), Absentia (Amazon Prime), and the VR Video Game Medal of Honor: Above and Beyond (EA).
This user account status is Approved

NAMI MELUMAD is an Israeli-Dutch composer, based in Los Angeles. Her scoring credits include over 140 projects, in a wide range of genres. She has composed scores for numerous films and tv series, including Marvel's Thor: Love and Thunder (co-score with Michael Giacchino), The Woman in the House Across the Street From the Girl in the Window(Netflix), An American Pickle (HBO Max), and Far From the Tree (Disney+). Her Score for Star Trek: Q&A back in 2019 landed her two Star Trek shows- Star Trek: Strange New Worlds and Star Trek: Prodigy (Paramount+), making her the first female composer for the franchise.
Additionally, she scored Amazon thriller-drama series, Absentia, starring Stana Katic, and Electronic Arts' VR video game Medal of Honor: Above and Beyond. She also contributed music and arrangements to Amazon's latest hit, Borat Subsequent MovieFilm.
Melumad's works claimed multiple international awards and nominations. Nominated for Breakthrough Composer of the Year by the International Film Music Critics Association, Nami won the IFMCA Award for Best Original Score: Video Game for "Medal of Honor: Above and Beyond", and the BMI Award for the Oscar® winning documentary short, Colette in 2020. She also won the Hollywood Music in Media Award for Passage and Best Short Score at Fimucite for Luminarias (out of 908 score entries), among many other nominations. Her compositions have been performed by the Hollywood Chamber Orchestra, the Haifa Symphony Orchestra and the Helix Collective Ensemble. She takes pride in telling thought-provoking stories that make an impact on the viewer, such as Subira, Kenya's official entry to the 92nd Academy Awards, about a young Muslim woman who challenges gender stereotypes and tradition; Miss Arizona, a dramedy about a former beauty queen who meets four women at a shelter; More Beautiful For Having Been Broken, a drama focusing on a single mother and her special-needs child; and Not Your Skin, a documentary examining the issues of the transgender community through the stories of people who transitioned in different stages of their lives.
An alumna of the prestigious ASCAP Television & Film Scoring Workshop in 2016, Nami graduated from the SMPTV program at the University of Southern California in 2015 and holds a B.A. in multi-style composition from the Jerusalem Academy of Music, where she was admitted directly to sophomore year. Born in Israel, Nami started her musical life as a pianist and a flute player, performing in orchestras and bands, and she also plays guitars and uke. After completing her two-year IDF service she traveled the world with a big backpack (New Zealand, Australia, China, Thailand), and a small backpack (Israel, Europe, Canada, the US). Somewhat like her journeys, Nami's compositions are eclectic: she often blends orchestral sound with less-traditional instruments, vocals, synth, and jazz harmonies. Nami serves as a board member of the Alliance for Women Film Composers and is a member of Women in Film.
She/Her

THOR: LOVE AND THUNDER (Marvel Studios)
STAR TREK: STRANGE NEW WORLDS (Paramount+)
STAR TREK: PRODIGY (Paramount+)
THE WOMAN IN THE HOUSE ACROSS THE STREET FROM THE GIRL IN THE WINDOW (Netflix)
FAR FROM THE TREE (Disney)
AN AMERICAN PICKLE (Colombia Pictures, HBO Max)

IFMCA Award for Best Original Score: Video Game for Medal of Honor: Above and Beyond