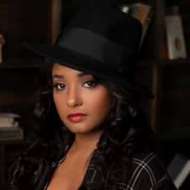 Natalie Litza
Los Angeles•natalielitza@gmail.com
I am an artist and composer. I enjoy the challenge of telling stories through music in all its forms.
This user account status is Approved

Natalie Litza Cadet began her music career early on at age 4 in the heart of the church. She was a child prodigy discovering her gifts and love for music. She started playing piano by ear and singing publicly with her family of five sisters, billed as the Cadet Sisters. Litza's illustrious musical growth and development began there and would eventually catapult to where she is today being a songwriter, singer, producer, and musical arranger.

Litza's hard work and discipline with her God given talent has provided the opportunity to attain her Bachelor's degree in Vocal Performance and Pedagogy from Oakwood University in Alabama and then later earn her Master's degree in Contemporary Improvisation from New England Conservatory in Massachusetts. Litza's academic accomplishments could only be bested by her inspiration and desire to continually enjoy playing and creating music .

Litza has since applied her formal education and training to the professional world of music. Her consummate ability and talent in performance and creativity have opened doors unimaginable. In 2016, she recorded and released an album entitled My Journey. In the following years, Litza recorded an additional six singles. Litza has been consumed in various projects that have provided experience and music credits by working with artists such as Juan Gabriel on the album, Los Dios. She also did the musical arrangement and the vocal performance on Lisa Dondlinger’s album Movies & Masters. Other credits to note are Litza’s work as an instructor at Musician’s Institute, and her budding role as composer for TV and Film.

Litza continuously works to explore opportunities that expand and develop her music experience. Her talent has been recognized and garnered the attention from producers such as Carl Gustafson, of Blinddog Smokin, who's behind the upcoming epic Moja, a Music Saga. Litza thrived in her role as one of the principle songwriters, co-producer, and arranger, demonstrating her skills by collaborating and writing over 50 songs for over 500 musicians worldwide, including many Grammy winners and nominees. The genres represented in her arrangements were diverse which comprise of Negro spirituals, blues, jazz, R&B, funk, and Hip Hop, blue grass, and

many more. With a variety of songs being recorded, it was the universal language being represented as a coalition of influences from Africa, Cuba, and England and the USA. Celebrities and artists on this gigantic international project involved Basekou Kouyate, Tata Vega, Take 6, Bobby Rush, Darius and DJ McCrary, Mark Kibble, Pedrito Martinez, Shelea, Weedie Braimah, Safi, Magatte Sow, and many more. Also worth noting that among thirty-one engineers on this project were New York’s Grammy winning engineer, David Kahne and LA’s Tony Shepperd.

Litza continues to be active in the music community as she has established membership with Alliance for Women Film Composers(AWFC) in L.A.
Her ability to compose original lyric and music makes Litza a talent with the options to be the creative singer, songwriter, and arranger as she develops a business model for success. Natalie Litza Cadet is destined for greatness.