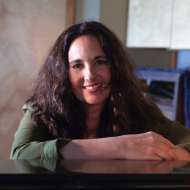 Starr Parodi first entered the public eye playing keyboards as part of the house band on the hit late-night Arsenio Hall Show. Since then she has become a vibrant part of the Los Angeles composing community, scoring hundreds of episodes of TV & film as well as being a passionate and innovative solo artist, pianist and producer whose work has been featured on NPR, The BBC, KCRW and iHEART Radio.

Starr is the first woman to have her orchestral works performed in the 90-year history of the Festival of Arts - Pageant of the Masters in Laguna, CA, where she is currently a featured composer.

Starr has released three critically acclaimed solo albums and collaborated on the writing and production of numerous recordings. Her album COMMON PLACES won “Record of the Year” from Solo Piano Radio and was lauded by KCRW’s host and taste-maker Chris Douridas “This deeply passionate and beautiful recording is one of the best albums of the year.” Her neoclassical release, THE HEART OF FRIDA, which celebrates the life, art and courageous spirit of beloved artist Frida Kahlo, won awards for Solo Piano Album of the Year from both International Radio Broadcasters (ZMR), and solopiano.com.

In 2017, for ”The Women in the World Summit” hosted by Scarlett Johansson, the New York Times invited Starr to Lincoln Center to conduct “To All The Little Girls,” a music video and performance she produced and arranged with Oscar winning filmmaker Terry Sanders, which celebrates the potential of young women. In 2019 Starr was again featured at Lincoln Center with a world premiere of her concert work “The Joy of the Waters” as part of  the Grammy® winning “Women Warriors:The Voices of Change.”

Starr has won numerous awards including a 2021 Hollywood Music in Media Award (HMMA) for Best Contemporary Classical, was honored with both the 2021 SHE ROCKS - VISION Award, the 2022 BMI IMPACT Award, and is a featured composer and artist on the iconic recording “Women Warriors: The Voices of Change” which won the Grammy® in 2022. As a producer and featured artist, she has been nominated for the 2023 Grammy® award in the Classical Compendium category for her work on Kitt Wakeley’s An Adoption Story.

A trailblazer onstage and in the studio, Starr served as President of the Alliance for Women Film Composers (March 2019- March 2021), is currently a co-chair of the AWFC Advisory Board and is widely recognized as a leader in expanding the reach of women in the arts as a composer, producer, performer and cultural visionary.

"If you listen closely you can hear the ghosts in her music." - R.J. Lannan