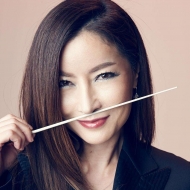 Sujin Nam
Los Angeles•sujinnam@me.com•IMDb
Sujin Nam is a composer, orchestrator, arranger, pianist and conductor. She is a composer with heavy orchestration training who naturally creates music in depth for films, TV, games, pop, and opera.
This user account status is Approved

A film composer, Sujin Nam's musical career began with heavy classical training. Born in Seoul, South Korea, she started playing piano when she was four.
Nam later moved to New York City and studied music at The Mannes College of Music. She received her master's degree at University of North Texas, where she studied passionately jazz performance, arranging, classical piano performance, conducting and composition. With her musically diverse academic background, she continued her studies at University of Southern California, this time in film scoring which enabled her to study with such legendary film composers in the history of film music as Elmer Bernstein, Leonard Rosenman, and David Raksin.

Her first Hollywood film project was Entrapment (music by Christopher Young) in 1998 as a score coordinator. As a score coordinator or orchestrator, Nam has worked on Spiderman 2, Spiderman 3, The Grudge, The Hurricane, etc. She has worked closely with such film directors as, Norman Jewison, Curtis Hanson, Sam Raimi and Jon Amiel on studio films produced by 20th Century Fox, Universal, Paramount, Columbia, MGM, and Miramax.

As a composer, Nam has worked with a number of great international musicians and orchestras for film and TV projects. Her diversity in musical styles has been displayed in horror, drama, romantic comedy, and ethnic films. A recipient of the coveted Sundance Composers Lab for 2002, Nam is actively composing and conducting music for films, TVs, animations and concert music, and she also lectures in universities.