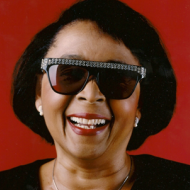 VALERIE CAPERS
New York•valcapmusic@gmail.com•http://www.valcapmusic.com
Please see more about my background and hear my music at my website: valcapmusic.com
This user account status is Approved

Dr. Valerie Capers was born in the Bronx and received her early schooling at the New York Institute for the Education of the Blind. She earned her bachelor’s and master’s degrees from The Juilliard School of Music, the first blind person to do so. For several years she served on the faculty of the Manhattan School of Music. She was also a member of the faculty in the Department of Music and Art at Bronx Community College of the City University of New York (CUNY) where she introduced several jazz courses to the music curriculum. From 1987 to 1995 she served as department chair, where she is now professor emerita.

An accomplished composer, her most noted extended works are Sing About Love, the critically acclaimed Christmas cantata produced by George Wein at Carnegie Hall; Sojourner, an operatorio based on the life of Sojourner Truth, performed and staged by the Opera Ebony Company of New York and commissioned by the National Endowment for the Arts (NEA); and Song of the Seasons, a song cycle for voice, piano, and cello which was commissioned by the Smithsonian Institute and premiered in Washington, D.C., at the invitation of the Smithsonian, and since then, has been recorded by several artists.

Her numerous radio and television program appearances include Marian McPartland’s Piano Jazz (twice) and Branford Marsalis’ JazzSet. Adventures of Wagner in Jazz, a special program created by National Public Radio (NPR), and About Music (two separate programs, “Traditions and Personalities in Jazz Piano” and “American Composer and Piano Virtuoso: Louis Moreau Gottschalk”), were all broadcast on KBYU-FM in Provo, Utah, and carried throughout the country on NPR.

Throughout her career, she has performed with a roster of outstanding artists, including Dizzy Gillespie, Wynton Marsalis, Ray Brown, Mongo Santamaria, Tito Puente, Slide Hampton, Max Roach, James Moody, Paquito D’Rivera, and Jerry Weldon, among others.

Dr. Capers’ recordings include Portrait in Soul (Atlantic), Affirmation (KMA Arts), Come on Home (Columbia/Sony), Wagner Takes the ‘A’ Train (Elysium), and Limited Edition (VALCAP Music). Her book of intermediate-level piano pieces, Portraits in Jazz, was published by Oxford University Press (OUP) which has also published her arrangement of the English carol – “It Came upon the Midnight Clear” – for mixed chorus a cappella.

Among the awards and commissions she has received are the National Endowment for the Arts, including a special-projects grant to present a jazz series at the Bronx Museum of the Arts, Meet the Composer, the CUNY Research Foundation, the Smithsonian, and The Fund for Artists of Arts International. Dr. Capers was the first recipient of Essence magazine’s “Women of Essence Award for Music” where she was in the elite company of fellow honorees Oprah Winfrey and Marla Gibbs. She has been recognized by the Bronx Music Heritage Center as a Bronx Living Legend for her “enduring legacy to the American jazz tradition,” and she is a distinguished member of the Bronx Walk of Fame. In fall 2015, New York City Mayor Bill DeBlasio appointed her to the city’s prestigious Cultural Affairs Advisory Commission.