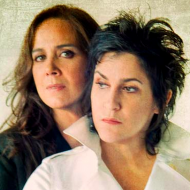 Wendy Melvoin and Lisa Coleman are an Emmy® Award winning musical composing duo based in Los Angeles. They both started their careers in one of the most successful rock bands of the 80s, Prince & the Revolution. They continued to work as a duo and released five original albums as well as pursuing a career path in scoring feature films and television. Since 1995's box office hit Dangerous Minds, Wendy & Lisa have set a successful track record scoring films such as Soul Food, Something New, television series' "Crossing Jordan," "Nurse Jackie," "Touch" and the Emmy-nominated NBC series "Heroes."

Since their breakout work in Dangerous Minds the duo have gone on to win numerous ASCAP Awards for Top TV Series (Heroes, Crossing Jordan, Carnivale and Touch) and Top Box Office Films (Dangerous Minds) and a 2006 Black Reel Award for Best Original Score for "Something New."

Wendy and Lisa are childhood friends, both from musical families which often performed together; Wendy's father, Mike Melvoin, was an in-demand session musician and was president of the National Academy of Recording Arts and Sciences (NARAS) in the 1980's, while Lisa's father, Gary L. Coleman was also a popular session musician and played on the Beach Boy's famous Pet Sounds sessions, numerous Carpenter's records as well as most of the notable Motown artists of the 1970's. Both Lisa and Wendy are multi-instrumentalists.

Apart from their composing career, Wendy & Lisa are often sought out for their song writing and collaboration skills. They have collaborated on albums with Joni Mitchell, Sheryl Crow, Eric Clapton, Neil Finn, Seal and Grace Jones to name a few.

Currently, Wendy & Lisa are working on "Heroes: Reborn," and the new Jennifer Lopez police procedural, "Shades of Blue," both for NBC.

Their full-length score soundtrack to "Heroes" titled "Heroes: Original Score" was released in April 2009 which includes Wendy & Lisa's opening theme score and compositions for each of the show's main characters. Lionsgate Music/Showtime released Wendy & Lisa's original music to Nurse Jackie in March 2010. It features 30 cues from the hit Showtime television series Season One. The Main Title Theme for Touch is available via iTunes as well as Wendy & Lisa's version of Bob Marley's "Three Little Birds" (with vocals by Karen David.)

Wendy Melvoin and Lisa Coleman were honored by ASCAP in 2014 with the inaugural Shirley Walker Award. The Shirley Walker Award honors those whose achievements have contributed to the diversity of film and television music. They won Outstanding Original Main Title Theme Music for the Emmy®-nominated comedy series Nurse Jackie in 2010 and were also nominated for an Emmy in 2012 for their Main Title work on "Touch."