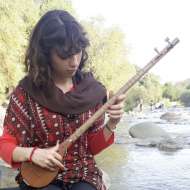 Yasaman Ghodsi
Los Angeles, New York, Boston•ghodsi.yasaman@gmail.com•https://www.yasamanghodsi.com
I'm an Iranian musician from a visual arts background. I just received my MA in Music Composition from Tufts University and I'm hoping to connect with other film composers and filmmakers.
This user account status is Approved

Yasaman Ghodsi is an Iranian composer, multi-instrumentalist, and painter inspired by Persian art and culture. Coming from the East to the West, her sound world often blends Persian and Western Classical Music elements.

Film scoring, improvisation, and Persian Classical music performance are her main interests. She is currently scoring a short documentary, Half the History: Margaret Lothrop and the Wayside, directed by Jennifer Burton, as well as composing a series of piano solo pieces named "Prelude for home."

Her music has been performed by Loadbang ensemble, John McDonald, Emmanuel Feldman, Anna Griffis, and Aaron Larget-Caplan, who described her as “very promising,” among others.

Recently, Yasaman has scored a short documentary, Shirley Chisholm, Catalyst for Change: a Portrait in Eight Parts, directed by Jennifer Burton and Ursula Burton. Additionally, Loadbang ensemble premiered her to write a piece in collaboration with Iranian Female Composers Association (ICFA), for which she composed music for two of Baba Taher's poems named Exile and You Are Everywhere. These pieces were performed at Opera America in New York City, among other IFCA members pieces.

Yasaman is passionate about teaching and learning. She is a piano tutor and a music teacher at Bagche for Music Language and Art in Boston where she previously thoght Farsi. She has also been a teaching assistant for several courses at Tufts University including: Intro to Theory & Musicianship, Music on film: Film on Music, Intro to World Music, and Intro to Oil Painting.

Before migrating to the USA to pursue her MA in Music Composition from Tufts University, Yasaman earned her BA in Painting in Iran. She has had several solo and group visual arts exhibitions, and now she is working on her new painting collection. Yasaman spends her spare time reading poetry, doing Taichi and Qigong, and leaning about the mind.