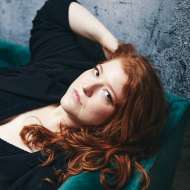 •Zoe.lustri@gmail.com•http://www.zoelustri.com•IMDb
Zoë Lustri is a composer and songwriter currently based in Los Angeles, California.
This user account status is Approved

Zoë Lustri (she/her) is a songwriter and composer from Austin, Texas. She loves to write music and hates to write bios.

​She began her life in music from the tender age of 5 years old--writing classic hits about playtime and the struggles of parents telling you what to do. From then the ball was rolling and it hasn't stopped. She loves the collaborative nature of music and writing to media, and always jumps at the opportunity to work with new people.

Zoë has a Bachelor's Degree in Film Scoring from Berklee College of Music. Upon graduating, she moved to Los Angeles where she interned for Bear McCreary and Henry Jackman. She has since found a home at Joy Music House where she has worked in score production on a variety of projects including the Emmy & Oscar nominated RBG, and Emile Mosseri's Oscar nominated, BAFTA award winning score to Minari.

​When she is not enveloped in music for media, Zoë is working on her personal songs and artistry. In 2020, Zoë Lustri shocked the world when she released her debut single Something Good. A song that a random Indie blog once said “[sounds] absolutely great, but unfortunately I feel it sounds a little too commercial for my playlist”. Something Good features strong, prominent vocals exploring introspective lyrics as a conversation on depression while giving a sonic palette that is both ambient, cinematic, and driving. With an impressive 227 Instagram followers and 44 Spotify listeners, Zoë Lustri is redefining the word "icon". Her single Something Good was succeeded with her song Feeling It Now, Aquarium Store, and other future songs to follow.

Give Me An A: The Crucible
Where We Left Off
This is She